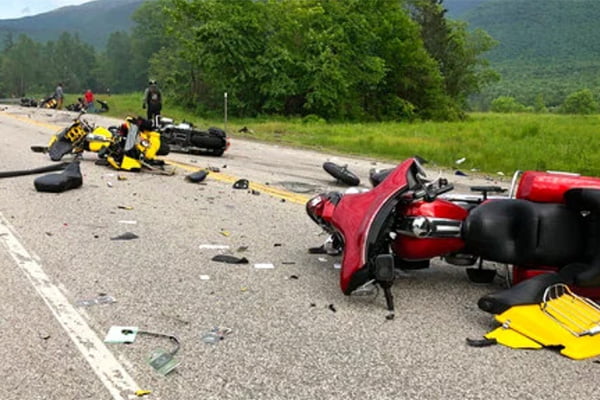 “The system failed 7 bikers, veteran Marines, killed on a New Hampshire Highway. That’s the finding of the final report by the NTSB into the deaths of those known as the “New Hampshire 7.” Among the findings, a board says deficiencies in out-of-state driver’s license notification processing and insufficient federal oversight of motor carriers contributed to the horror on the highway. The board also found however that shortcomings in motorcycle rider safety contributed too.

The board approved a draft of the report a few weeks ago. Here’s the original story about that:

Systems meant to keep motorists safe failed to prevent a pickup driver on drugs from crashing last year into an oncoming group of motorcyclists in New Hampshire, leading to the death of seven bikers, the National Transportation Safety Board found Tuesday.

The board unanimously approved a report that determined that Volodymyr Zhukovskyy’s impairment from the drugs was the “probable cause” for him crossing the center line on a rural, two-lane highway and sparking the fiery crash.”

Motorcyclists are especially vulnerable on the road due to the limited protection provided by this type of vehicle. It took only 1 truck driver to cause such a tragedy due to being under the influence from drugs. The revelation that Westfield Transport, the company for which the defendant was employed, has a history of numerous violations. It seems like, unfortunately, this incident was almost destined to occur.

At Krug & Zupke, P.C. our expertise in personal injury law has helped clients get the justice they deserve. If you’ve been involved in a motorcycle accident calls us at 651-645-7746 for a free consultation.

How a work injury can lead to an opioid dependency