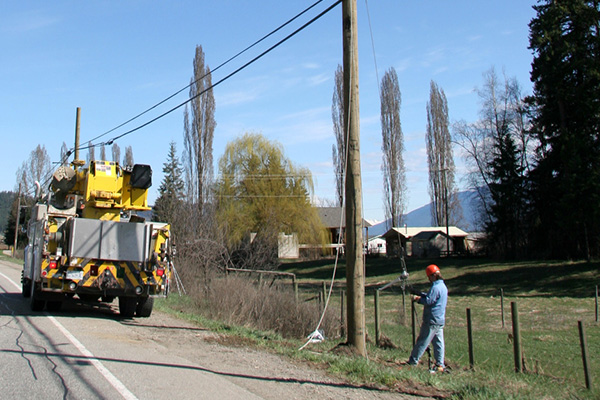 “A cable installation subcontractor has been gravely injured in a freak accident in St. Paul just before noon on Wednesday, police said.

A cable installation crew was working near the intersection of Rice Street and Geranium Ave, and had a cable across the roadway, said Sgt. Michael Ernster, a public information officer with the St. Paul Police Department.

This is apparently a common practice as crews prepare to install the wire, and vehicles were allowed to drive across it, Ernster said in a statement.

But a passing vehicle, possibly a Metro Transit bus, snagged the wire as it drove over the line, police said.

The vehicle pulled the cable tight, as it was still attached to a nearby spool. The cable ensnared a worker standing nearby, and the force of the cable being pulled caused him to collide into the side of a pickup truck on Rice Street, according to reports.”

Read more on the accident here.

Apparently, the cable became wrapped around the worker’s leg and the sudden force from the vehicle caused it to be severed. Reports indicate that the worker should survive the incident. However, such an accident will surely require extensive therapy and rehabilitation. It’s unknown if the leg is able to be re-attached.

Freak accident is one way to describe what happened, although, it seems an awful lot like workplace negligence. Were proper protocols followed during this installation process? A catastrophic injury like this is life-changing and someone needs to be held accountable.

If you or a loved one have suffered a serious injury at work call Krug & Zupke, P.C. at 651-645-7746 for a free consultation. We will fight for your right to maximum compensation.